State Lawmaker Says Bicycling Is Not Good For The Environment

Representative Ed Orcutt (R – Kalama) does not think bicycling is environmentally friendly because the activity causes cyclists to have “an increased heart rate and respiration.”

This is according to comments he made in an email to a constituent who questioned the wisdom of a new bike tax the legislature is considering as part of a large transportation package.

We spoke with Rep. Orcutt to confirm the email’s authenticity and to get further clarification.

“You would be giving off more CO2 if you are riding a bike than driving in a car,” he said. However, he said he had not “done any analysis” of the difference in CO2 from a person on a bike compared to the engine of a car (others have).

“You can’t just say that there’s no pollution as a result of riding a bicycle.”

He said the email, which he had not reviewed since he is away from from his computer for the day, must have come from a constituent who disagrees with him (UPDATE: Cascade has posted the full exchange, which was with Dale Carlson, owner of BikeTech in Tacoma).

“Somebody doesn’t like me, and that’s fine,” he said.

He also stands by his opinion that people who bike do not pay for roads when they ride.

That people who bike don’t pay for roads is demonstrably untrue. Most roads people bike on are paid for by counties and municipalities. In Seattle, gas taxes pay just four percent of the SDOT budget (as of 2009). Most of the rest comes from sources everybody pays, no matter how they get around. On a state level, gas taxes only pay for one quarter of the WSDOT budget.

As for the transportation package, he said the amount of money that would end up going to bike lanes is higher than the amount raised by the proposed bike tax.

“You’re asking for a whole lot more back than what you’re going to put in,” he said (we responded to this point here). 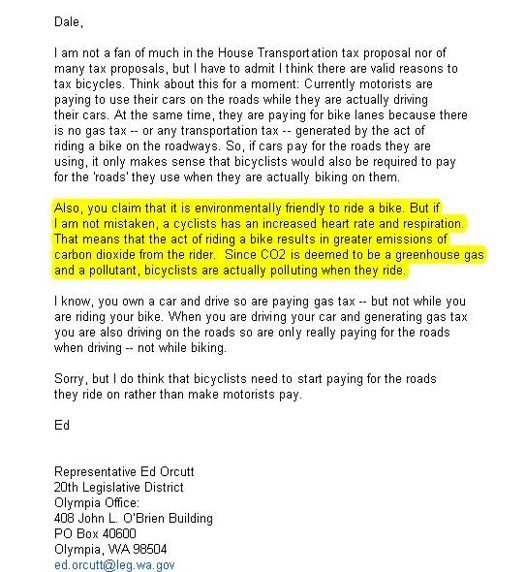 This news article featuring Bob Mionske has been reproduced here for our archives. To access…

Court Rules That Even On A Bicycle, It’s Reckless Driving

The San Francisco Chronicle: Court rules that even on a bicycle, it's reckless driving Bob…